COVID-19: Our team has implemented changes to be compliant with CDC guidelines and are currently making/keeping appointments to see patients who are not running a fever, do not have a dry cough, and are not suspected to be infected. As we continue to follow our state board as to the role of chiropractors in the current pandemic, keeping safety of our patients and staff top priority, we thank you for understanding this is subject to change.
Migraines and Vertigo Often Go Hand-in-Hand – Here’s How to Cope Skip to content 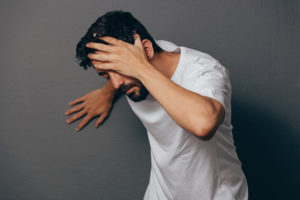 It’s bad enough to have to deal with the debilitating pain of migraines, but when you also feel as if the world around you is spinning, it can be intolerable. Let’s take a closer look at this condition called migraine-associated vertigo (MAV) and then consider what can be done to alleviate it.

Migraines are one of the most disabling chronic disorders in the USA. They are more common than asthma and diabetes and almost as prevalent as high blood pressure. Unfortunately, migraines seem to strike when people are at their most productive years – between the ages of 20 and 40 for most women and a slightly higher age for men. Women are 3 times more likely to get migraines than men.

Diagnostic capabilities are increasing all the time while public education is improving as well. Despite this, as many as 50 percent of migraine cases go unproperly diagnosed or mismanaged. A majority of people decide to care for their problem on their own. Others get diagnosed with sinus or other headache types.

Migraines are most known for the following symptoms:

Around 40% of those with migraines have some kind of vestibular syndrome that disturbs their balance or causes dizziness at one time or another. This may happen before, during, after, or totally independent of a migraine event.

The vestibular symptoms that accompany migraine-associated vertigo may include (but are not limited to):

It is not unusual for these symptoms to appear with regular migraines also. A study evaluated 200 patients from a migraine clinic, a dizziness clinic, and a control group from an orthopedic clinic. Those who were diagnosed with vertigo showed a higher lifetime prevalence of migraines (38%) than a similar group of patients in the control group. Similar results have been noted when evaluating migraine patients.

Another study pointed out that patients suffering from migraine-associated vertigo have greater cognitive impairment than do those with just migraines. They scored lower on cognitive tests than those with simple migraines. An MRI revealed they have a greater incidence of deep brain, peripheral lateral ventricle, and total white matter lesions as well.

No matter what your symptoms are, it is a good idea to do all you can to avoid bringing about the pain and discomfort of migraines. Here is a list of some common triggers you may want to avoid for relief:

This subject is still very much under debate. However, with the emerging of new technology, such as imaging studies, there is a little more information available as to how a migraine evolves. The general consensus is that migraine-associated vertigo is related to a mixed pathophysiology of cerebral spreading depression of electrical charges along the cortex followed by the activation of pain receptors in the brainstem. Neurotransmitters are then released and blood vessels become dilated near the scalp and other areas outside of the brain.

Migraines are also thought to be a genetic disorder resulting in sensitivity to an abnormal amount of neurons being released. The exact way migraines work is not really understood completely. But it has been proven that it is not entirely vascular in nature. It is now understood to be a combination of neural and altered vascular processes. This may make it easier to care for. The question becomes: What is causing changes in the brainstem to take place, and can this be addressed?

Why Upper Neck Misalignments Cause Migraines

One thing repeatedly seen with migraine patients is that many of them have a misaligned atlas or axis bone. These are the top two bones of the neck and are responsible for not only protecting the brainstem but also supporting the head and allowing it to turn in many directions. That makes these bones susceptible to misaligning. A misalignment in this area can cause a number of negative consequences in the body. For one thing, the flow of blood, cerebrospinal fluid, and oxygen to the brain can be hindered. Blood backing up within the brain or lack of proper oxygen flow can bring about a migraine. The brainstem is also impacted. The atlas and axis were designed to protect the brainstem. If they become misaligned, they have the opposite effect and can put the brainstem under stress. What happens then? The brainstem sends improper signals to the brain, leading to migraines and other serious health problems.

As upper cervical chiropractors, we focus on making sure our patients have proper spinal alignment. We employ a gentle method that encourages the atlas and axis to move back into their proper position without the need to pop or crack the spine. Once readjusted, studies have shown that many patients see migraines improve and even go away completely. Often positive results are seen in only one or two visits to our office.