COVID-19: Our team has implemented changes to be compliant with CDC guidelines and are currently making/keeping appointments to see patients who are not running a fever, do not have a dry cough, and are not suspected to be infected. As we continue to follow our state board as to the role of chiropractors in the current pandemic, keeping safety of our patients and staff top priority, we thank you for understanding this is subject to change.
Men and Migraines -- 10 Interesting Facts and Relief Skip to content 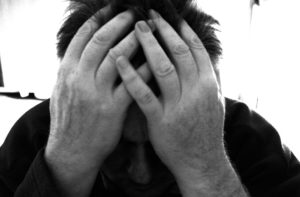 Migraines are known to cause very intense head pain that is often accompanied by nausea and vomiting, sensitivity to sound, light, and noise, and visual disturbances. They can last anywhere from 4 hours to 3 days and can take just as long to recover from. While women get migraines 3 times more often, men to do get them as well. As many as 39 million in the USA have migraines: 18 percent of women and 6 percent of men. Men suffer just as much as women do, but it is often less talked about. Let’s discuss 10 interesting facts about men and migraines.

10 Interesting Facts about Migraines and Men

Migraines have been repeatedly linked to a misalignment in the bones of the upper cervical spine. This can happen easily with men because of the amount of physical labor or contact sports they are involved in. This places great wear and tear on their bodies. Aging also adds to the mix as it wears down the soft tissue of the spine. As men age, the tension in their neck increases. This can lead to a misaligned atlas or axis bone, the top bones of the neck, and can hinder the amount of oxygen-rich blood allowed to flow to the brain, causing migraines.

Upper cervical chiropractors use a unique method that differs from traditional chiropractors in the fact that we do not resort to popping the back or cracking the neck to get results. Rather, the method we use is based on scientific measurements, detailed imaging, and precise, gentle techniques to help the bones of the neck move back into place. By doing this, the body can heal faster and keep the bones in position for a longer period of time. We only give adjustments when necessary, so this saves you time and money down the road.

The atlas and axis bones of the neck are designed to protect the brainstem. If they misalign, which they are very susceptible to do, they can put the brainstem under pressure. This causes communication and, as mentioned, blood flow to be hindered — the very scenario for migraines to occur.

If you suffer from migraines, whether you are male or female, young or old, it is a good idea to come see us for an evaluation. You just may find yourself with fewer migraines or migraine free in a short amount of time.